The Beacons that brought Light to Future SMART Citizens

Recently our future SMART Citizens had a unique opportunity to enjoy an entertaining and inspiring show offered by the Beacons Project.  About twenty young musicians joined us at our SMARTConnects event to talk about folk music and perform some of their pieces.

The auditorium was full of hundreds of students currently enrolled in COAF SMART musical programs, as well as their parents and other guests, impatiently waiting for the performance. 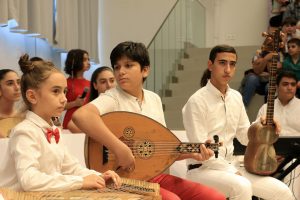 “We are trying to bring the world closer to rural communities,” COAF SMART Center Manager Krist Marukyan said at the beginning of the event, smilingly, “If you want the darkness to disappear, the only thing you have to do is adding light. That’s what all of us have been doing here – bringing light… ”

This time, “the light was brought” by the Beacons Project, consisting of gifted children and teens, aged 5 to 15, from around Armenia. Singer Ani, duduk players Vache and Vahagn, kamancha player Hovhannes and others performed folk music with Armenian musical instruments and recreated some of Komitas’ most memorable pieces. In addition to playing and singing, the talented group members were the ones conducting the concert. 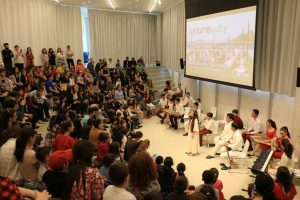 The performance started with Kakavik, one of the most famous songs by Komitas. Then the audience enjoyed other music pieces by Komitas, followed by the second segment of the concert dedicated to Armenian folk songs and dances. Some of the unique music arrangements were made by Eka Horstka, a partly Ukrainian, partly Armenian opera singer, the artistic manager of the Beacons Project and the founder of Artissimo NGO. Her NGO was created in 2017, to solve various problems by using the most powerful tool – the curative, constructive, developing, and educational superpower of art.

The group was launched by the Naregatsi Art Institute, as part of the one hundred-year anniversary of the Armenian Genocide in 2015 when 150 gifted children from all around Armenia   performed at various commemorative events. They “lit” the commemoration with their talent and art. At that time, one hundred beacons symbolized the commemoration of the genocide, as well as the rebirth of Armenia. 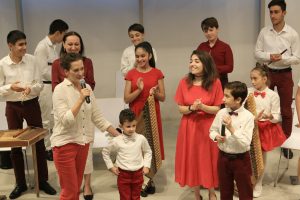 And this time, the Beacons Project “lit” the lights at the SMART auditorium, as well as the hearts of hundreds of rural children that happily clapped and tapped to their music.