When many years ago little Aghvan Mnatsakanyan said he wanted to become a president, none of his family members laughed and none of them said it was impossible. And his grandpa, Aghvan Mnatsakanyan, Sr., encouraged him, stating that a child should get the best education in order to serve the homeland.

Aghvan Mnatsakanyan, Sr, was one of the founders of Hatsik community, a Hero of Labor, a kind and wise man.

“My grandpa has always offered wonderful pieces of advice. He thought that I should strive for the best. He was a real patriot… He has advised me lots of books. Thanks to him, I started loving historical novels,” Aghvan, Jr. ponders. “And, thanks to him, I got interested in politics and started thinking of becoming a useful person.” 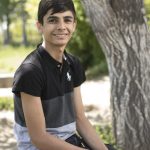 Unfortunately, little Aghvan could not enjoy his grandpa’s presence and pieces of advice for a long time. He was eight years old when his grandpa died.

Years passed. Lots of changes happened to Aghvan. He started paying more attention to his studies and got enrolled in the clubs launched by Children of Armenia Charitable Fund. “COAF grants so many possibilities to people. I have learned English through COAF and have made lots of new friends both in Armavir and Lori.

The boy got involved in COAF debate sessions and became a member of Aflatoun social and financial education club. “COAF also helped me take classes at Tumo Center for Creative Technologies. I learnt programming there,” Aghvan says proudly.

Very soon new heroes appeared in his life. Aghvan got interested in the life and activities of Martin Luther King. “I read a lot about him and I realized that all people were equal, and that discrimination was something very awful.”

And then a very emotional thing happened to him. “I met a person, and I was so touched by our meeting that I almost cried… COAF founder Garo Armen visited our school. I did not have a chance to talk to him in person. However, when he made a speech, I was very impressed. Of course, I was aware of his huge input into the development of rural Armenia. I knew that he was a real patriot. At first, I could not understand why I got so emotional… Suddenly I realized that… Garo Armen looked and talked just like my grandpa. My grandpa that I had lost years ago. I missed him a lot.  He had the same kind face and even the same smile. My grandpa wanted Armenia to become a powerful and prosperous country, just like Garo Armen…”

Now 16-year-old Aghvan has a new role model – Garo Armen. “I really want to resemble him. I want to show to the world that 3 million smart and intelligent people live in Armenia. And, by the way, I don’t want to become a president anymore,” the boy laughs. “I have changed my mind – I want to be a prime minister…”