Recently, a parent said after a session at the COAF SMART Center, “My kid behaved badly, and I wanted to hit him… And then I remembered what miss Armine said and held back…”

Armine Galstyan is a psychologist that not only works with children at COAF SMART Center but also conducts seminars with their parents. The recent workshop related to effective parenting skills. “We have been working with 150 preschoolers and their parents from 10 communities in Lori”, Armine says. “We already know their characteristic features and try to fit our programs to their needs.” 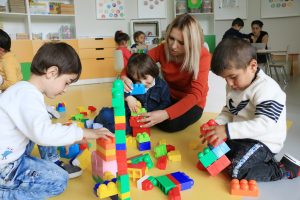 Armine smiles whenever a kid tells about the nice time spent at the Child Development Corner, “They enjoy spending their time with us.”

The young professional has been working with COAF for 2.5 years. At first, she worked as a community psychologist in Debet and Dsegh. Then, she conducted monitoring in Tumanyan and Berdavan communities.

“Before working with COAF, I was a psychologist at Douleurs sans Frontieres and other organizations,” Armine says. “And now I am a facilitator at the COAF SMART Center Child Development Corner.

Armine’s workdays are full of fascinating and challenging events. “For example, we help children work with watercolors and glue. Can you imagine that there are lots of children that have never worked with such materials? Community kindergartens are lacking educational tools. And here, children have the chance to learn everything. We keep working with parents as well. We even have a special toy-making workshops for them.”

Armine puts special importance on early child development. “Early childhood is the basis for a kid’s future. We help them gain various skills that will make them successful in life.”

The psychologist admits that lots of children have difficulties communicating with each other. Many of them don’t know how to play together or how to ask for a toy. However, we work with them, and we overcome those difficulties together.”

Armine loves working in rural communities. “I am happy to work with COAF. It’s an organization that brings real changes in the life of children. COAF is more than just a job for me. Here I met my husband Karen who also works with COAF. We share our difficulties and joys. But most importantly, we share the same values making every effort to contribute to the development of rural communities.”