Gold can be found in the Mountains…

However, they hardly ever realize what kind of treasures can be found in their own communities, right under their noses,” he says.

Those treasures or, as Artush Khachatryan says, “the gold in the mountains” can also be found in his native Vardenik community in Gegharkunik region. Rumex, buckthorn, rosehip, Chaerophýllum, Falcaria… Vardenik residents working at Sareri Bariq pick all those plants from the mountains and fields and deliver them to supermarkets․

The story of the enterprise is quite inspiring, and recently Artush Khachatryan was hosted at the COAF Center to share his agricultural secrets and innovations with the SMARTConnects audience. 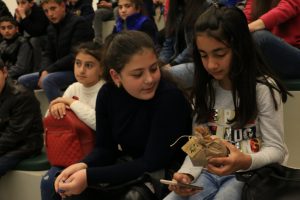 Artush makes every effort to contribute to the development of Vardenik. He founded Hamaynqi Zarkerak (Community Artery) Youth NGO and launched a dance studio and a movie theater. Then he started thinking about social entrepreneurship. “We have very harsh weather conditions here. Most people in Vardenik had nothing to do in summertime – no jobs, not much agriculture work to do… I realized that we could easily provide them with jobs.  After all, there are lots of herbs and edible plants growing around us… People could just gather them and sell them to the store.”

The agrotechnology students were excited about the meeting. When Artush asked them about the specific characteristics of Lori villages, as well as entrepreneurship opportunities, Grigor from Vahagni and Lianna from Yeghegnut started telling about monuments and rural tourism. Lianna even said that she would like to launch a museum in Yeghegnut. Artush Khachatryan suggested they should try to cultivate new plants and sell them to the stores instead.

“Currently we grow Brussels Sprouts, artichoke and broccoli. You should go to supermarkets, look at the agriculture products and think about growing them in your own backyard. Or maybe some of them grow right under your nose? COAF will help you get in touch with the stores,” Khachatryan said. “Just appreciate what you see in your surroundings and never miss an opportunity… Remember that “gold” can also be found in the mountains…”