Announces New Additions to Board of Trustees in Armenia

Children of Armenia Fund (COAF) held its first strategic planning summit of the year at the COAF SMART Center in Lori. The three-day gathering took place April 4-6, with the participation of COAF board members, COAF senior managers, as well as development and next generation technologies experts from Thailand, France, Malta, Czech Republic, Venezuela and the US.

During the Summit, COAF unveiled its expanded mission: to advance rural communities through innovation and to provide resources to children and adults through initiatives at COAF SMART and beyond. COAF founder Dr. Garo Armen emphasized two main principles the organization should abide by: innovation and speed. He stated, “our vision is based on applying innovation as a vital component of solving problems, along with the ability to promptly respond to changing paradigms in the fast-moving world we live in today.”

Summit participants agreed on upholding the longstanding COAF tradition of meeting with rural populations and taking into consideration their needs and input. The active participation of each and every citizen is critical to the development of both existing and new opportunities. COAF’s role in this process is to provide individuals with essential resources needed to bring about innovative thinking. The COAF SMART Center, opened a year ago, has already become a center of excellence where ideas are being exchanged on future policymaking. 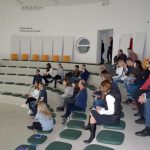 COAF also announced the appointment of three additional members to its Board of Trustees based in Armenia. Founder Dr. Garo Armen, Dr. Alice Saraydarian and entrepreneur Pakrad Balabanian will be joining the three existing trustees. Pakrad Balabanian, a geographic information system (GIS) expert and consultant for local governments, is the founder of KARDÉS LLC and truMaps mobile application. Balabanian has implemented projects with Abu Dhabi’s Department of Education, significantly impacting the education system in the United Arab Emirates. He is currently collaborating with the Ministry of Education of Armenia in an effort to enhance the country’s education sector, with a focus on Armenia’s rural communities. Balabanian is also a guest lecturer at New York University, Paris Sorbonne (Abu Dhabi branches) and UAE University.

COAF’s Board of Trustees in Armenia is currently chaired by Richard Bezjian (Energize Global Services). “We are delighted to have Pakrad Balabanian and founders Garo Armen and Alice Saraydarian join the COAF Armenia Board of Trustees,” said Mr. Bezjian. He emphasized their involvement will further strengthen the existing board comprised of education expert Serob Khachatryan and Ovsanna Yeghoyan (Commercial Director of DUFRY East Europe and Russia Cluster).

“Children of Armenia” Charitable Fund (COAF) is a non-profit, non-governmental organization that employs community-led approaches aimed at improving the quality of life in rural Armenia, with a particular focus on children and youth. COAF’s target development areas are education, healthcare, social and economic development. COAF launched its programs in 2004, starting in one village and expanding to 44 villages in Armavir, Aragatsot n, Lori, Gegharkunik, Shirak and Tavush regions.

Since 2015 COAF has developed and started implementing a new vision – SMART Initiative. SMART is designed to advance a generation across the rural world through education that will benefit individuals, societies and the environment. SMART will become an exemplary model of development and will be replicated in other regions and communities throughout Armenia.