The Center is a 1,826 sqm building with 20 guest rooms, 2 fully equipped conference rooms, a cafeteria, a professional kitchen and a leisure and meeting room. It will host summits, conferences, corporate retreats, expositions, exhibitions and other events.

During the groundbreaking ceremony COAF managing director Korioun Khatchadourian mentioned that one of the main objectives of the Center was increasing economic development in the region of Lori and transforming it into a sought-after tourist destination.

“Another important goal is hosting young people from various regions of Armenia and all over the world. They can stay here and participate in the camps and other events organized at the COAF SMART Center,” Mr. Khatchadourian said.

Thus, the Conference Center by COAF will expand the opportunities provided by the COAF SMART Campus, boosting the educational and economic progress of rural communities. 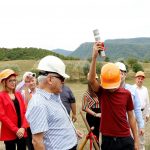 The ceremony had a lively turn-out when all the guests were offered to wield shovels to mark the territory where the Center would be constructed, after which the deputy governor Gayane Markosyan expressed hope that collaboration between COAF and regional administration would be long-lasting. “You are doing a great job by having your input into the advancement of rural communities,” she said. “The Center will hopefully attract more and more visitors to Lori region.”

“And let’s not forget about the core idea of the building,” Korioun Khatchadourian added. “The construction itself might be fascinating but what’s more important is the “content” that it has to offer to visitors.”

The Conference Center by COAF will be designed and constructed by d’Arvestanots architecture studio and Kanaka construction company. The construction will be completed, and the conference venue will be fully operational by the end of 2020.