It takes a village: the ways COAF changed Karakert

In 2003, COAF Founder Garo Armen was driving in Karakert village of the Armavir Province without knowing that place would become his reason for starting COAF.

Karakert naturally became the first village community where we launched our efforts, with the renovation of one of the local schools being the first major project implemented. We soon realized the needs in villages went beyond just infrastructure improvements and created education, health, social services, and economic development programs designed with a community-based holistic approach in mind.

If you drive through Karakert today, these are some of the stories our villagers will tell you about the ways COAF has changed Karakert since then. 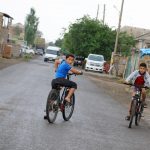 Among our 170+ infrastructure improvements, the two schools and two kindergartens, the health facility, and the Spiritual Center after G. Narekatsi were among the first ones in the 2000s. Since 2004, we have renovated 23 infrastructures including the ambulatory, the public library, parks, school yards, and the community center. 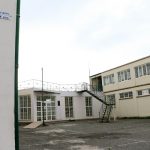 The school of Karakert renovated by COAF on the street named after COAF Founder Garo Armen.

“I was in the village of Karakert, where the school laid in disrepair; its students were learning in classrooms without walls,” once mentioned COAF Founder Garo Armen about his visit to the village. 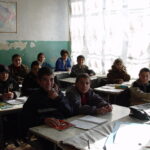 Hayk Sargsyan, the Logistics Coordinator at COAF, has lived in Karakert all his life. When COAF started conducting projects in Karakert and offered a training course on computer literacy, he immediately enrolled in it. Shortly after, Hayk was the one to pass his knowledge to others both in and out of his community. Nowadays, part of our COAF family, he knows the impact of COAF’s educational programs best.

COAF’s training courses and education programs have opened new horizons for the generations of Karakert. Currently, the programs empowering the village youth with modern skillset include Engineering, Basketball, Debate Club, Aflatoun, and the English Access Program.

Building a culture of volunteerism

COAF was the pioneer in bringing volunteering to Karakert. We have created volunteer opportunities for the youth through summer camps and special events in our beneficiary villages. These have proved to strengthen our students’ ties to their community, broaden their network and enable new advancement resources.

“Before people would consider volunteering unpaid labor, whereas, nowadays, the youth and even the elderly seek opportunities to get involved in and make an impact,” tells Khanoum Gevorgyan, a true-blue COAF Alumna from Karakert, who sees endless potential in the youth of her village.

Once, she won a grant and organized a clean-up in the community. “Many youngsters from both Karakert and the nearby villages volunteered in my initiative.” Instead of sitting and waiting or expecting a change from others, they now know they should be today’s change-makers, even if it is for free. 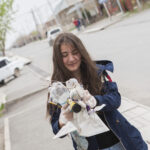 More than a decade later, our to-do list is still full of new projects and plans. The difference is, we are no longer alone in strengthening the rural communities of Armenia. Our work is well-armed with the new generation who pays forward to their community, bringing a positive change every single day.