Saving the world through culture

“Beauty will save the world…” Almost all of our COAF SMART Center Russian language students were familiar with the famous line that comes from Dostoevsky’s novel. However, the line was paraphrased for them when they came to take part in the SMARTConnects event with Liliya Balasanyan, the president of the Armenian Association of Russian language teachers.

Balasanyan delivered an interactive open class to future SMART citizens encouraging them to shape their own aesthetic attitude toward reality, understand the role of culture, comprehend their own emotions. 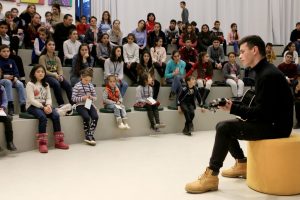 “Culture will save the world,” insisted Balasanyan during the class, “Culture unites people all over the world…” Then she talked a lot about the culture dialogue between the Armenian and Russian people, mentioning Tumanyan’s amazing  translations of Pushkin’s works, as well as one of the nine chapels of Saint Basil’s Cathedral in Moscow, named after Armenian Saint Gregory the Illuminator.

“You should promote the Armenian history among other nations,” she said. “Actually, I think that history lessons in Armenian schools should be also conducted in foreign languages, so that young people can manage to present our culture to the world.” 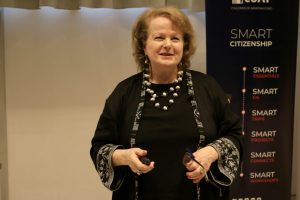 Balasanyan was a real “guru” of audience engagement, sharing fascinating stories, emphasizing the importance of culture and keeping the attention of not only SMART Center students but also a number of schoolchildren from Vanadzor, Fioletovo, Lermontovo, and Alaverdi. Many of them admitted they had obtained so much information about painters, writers and architectural monuments that they would need some time to “digest” it.

“For example, I didn’t know that Giuseppe Verdi had built a home in Milan for accommodating old and socially underprivileged singers,” one of the children said. “And he considered that home to be among his “best works.”

The interactive lesson culminated in a guitar performance by Edgar, a young musician from Alaverdi. He played a song based on Sergey Yesenin’s famous poem No regrets, no tears and no complaining… The young attendees greatly enjoyed the performance.

“Such events are a nice way to improve children’s language skills, as well as their understanding of world culture,” a student’s mother said after the class.