The repaired roof that will long be remembered

Leaving school and wrapping up that important chapter in life can often be emotional. This year the graduation ceremonies were canceled for many students all over the world, including Armenia. However, for Lyudmila Shirvanyan, goodbye with her school was one of a kind even without a special ceremony. She had made a gift to her Alma mater that would be cherished for generations to come.

Lyudmila, 17, is a COAF Alumna and a newly graduated high school student living in Mets Ayrum, a village in the Lori Province. A year ago, she would never have imagined that her yet another Facebook post would go viral and become memorable in her school history. That post turned out to be the future reporter’s first social change brought to her community.

Lyudmila took three pictures of her school corridor, library, and a room that soaked in rainwater flowing from the roof. The latter used to be a constant neglected problem in Mets Ayrum school that dramatically affected students’ comfort and hygiene maintenance in their educational environment. 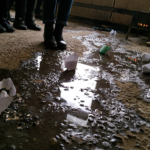 Schoolchildren prepared paper boats to float on “the sea” of rainwater in their classroom. One of the pictures Lyudmila posted on Facebook.

“I posted the pictures on Facebook thinking our school alumni could see its condition. To my surprise, a few days later, the post had 80+ shares. The rumors about my publication had reached the regional administration of Lori, and this is how the school condition was in the public eye,” tells Lyudmila, whose initiative eventually solved the school age-old roof problem. The regional administration of the Lori region financed the roof renovation – students will no longer have to see their classrooms in rainwater.

Lyudmila’s brave act was unusual for many locals who are still not used to talking about problems publicly. Though at first, not everyone welcomed her step of publicizing the school’s problem that is related to financial issues, they eventually realized the significant impact raising questions others are silent about has. “Hello to our hero,” is how people started to greet Lyudmila at her school.

Though she didn’t manage to study at the newly renovated school, she is glad her schoolmates will benefit from it. “The cafeteria renovated by COAF is the brightest and the most appealing corner at school,” mentions Lyudmila, wishing to see more improvements at her Alma mater. 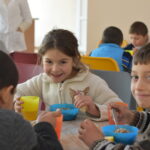 Passionate about the media, she wants to pursue her academic studies in Journalism. Media Literacy was one of the after-school clubs she took at COAF along with Aflatoun, Painting, Healthy Lifestyle, and Student Council programs. “Media can change the world,” believes the young thinker, whose first media analysis is the role of the media during the 2018 Velvet Revolution in Armenia. She thinks it was thanks to communication channels that the Revolution expanded its scale and touched thousands of citizens. 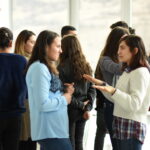 Lyudmila (on the left) during COAF’s Student Council gathering.

We admire and get inspired by the innovative spirit of our promising students who care about their community and give back even as teenagers. We are confident that the future of Armenia’s villages is in safe hands.