Meet Manushak Avagyan, 25, a medical graduate from Lernagog and a Yerevan-based Yeolyan Hematology Center resident. Also, she is a member of COAF Alumni Association.

Manushak doesn’t remember exactly when COAF came to Lernagog but she remembers the renovation of the local school.

“However, it’s not just about infrastructure renovations,” she says. “Educational programs and extracurricular activities offered by COAF had a huge impact on me. At that time, I had no idea I would get enrolled in a medical university and focus on scientific research.  I was just a kid that wanted to participate in the programs implemented by COAF, such as Healthy lifestyle and Photo clubs. Due to the knowledge that I gained from these programs I became a totally different person, with a changed mindset.”

Time passed, and Manushak realized that she was greatly interested in medicine and public health. Communicating with the COAF medical team and volunteering at their projects tremendously increased her wish to become a doctor. Eventually, she got admitted to the Yerevan State Medical University, later continuing her studies at American University of Armenia, completely focusing on her studies and research works.

“Once I read an article about Dr. Garo Armen, which was mainly about his path and Agenus, and the words that stuck in my mind were about immunotherapy, as well as treating cancer without huge chemotherapeutic harm,” Manushak recalls. “I kept this in my mind as a dream that seemed impossible to fulfill.” 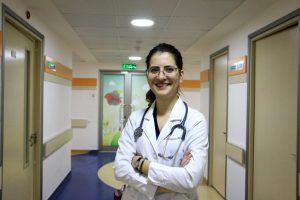 Manushak decided to specialize in pediatric oncology. She took part in several conferences and learned about innovative methods of treating diseases. She attended a short-term preclinical cancer research organized by the university, later publishing scientific works in international journals. After finishing the university with excellence, Manushak got a scholarship for residency/fellowship as a pediatric hematologist-oncologist.

Manushak’s first patient was a cute little boy aged 6. He was diagnosed with metastatic Ewing sarcoma. “After 6 courses of well-organized chemotherapy, we managed to reach 50% reduction in primary tumor size,” she says, proudly.

“You cannot work with children with cancer and be an average doctor. You should do your best,” Manushak says. “The thing is, that not all patients in my field are going to be cured, but at least I should try all the possible treatments available not only in our country but also outside. You should always fight for a child’s life and never give up.”

Manushak is convinced that COAF has contributed a lot to her becoming a good specialist. “COAF has instilled the idea of being the best version of myself. I don’t want to be someone ordinary; I want to go beyond the borders and achieve more as a doctor and as a scientist. COAF has taught me the importance and power of giving back. Now I try to empower young students in our schools to pursue their dreams and consider medical careers.”