The backstage life of a front stage actor

“How often do you go to the theater?” asks Narek Duryan.

“There are no theaters for us to attend,” a response comes from the audience…

Unfortunately, rural communities in Armenia are mostly devoid of entertainment places such as movie theaters, theaters, museums, and cafes. People need to pass a long way to reach the “guilty pleasures”. Among many priorities of developing the remote regions, instead of sitting and waiting, we have the solution at SMARTConnects.

Twice a month, the COAF SMART Center hosts an event with prominent and successful members of the society, who share their story with the audience. Open to all SMART students and the general public, such meetings are exceptional,  inspirational, and mutually expected.

This time, our guest at SMARTConnects was beloved actor Narek Duryan. Despite the snowy day and icy roads, we safely arrived at SMART. Duryan toured the center expressing his admiration for rare philanthropic acts such as the innovative educational center that supports rural children and improves their quality of life.

Both the young and the older generation came to meet the prominent actor, who in fact, had so much to share with his audience.

Duryan started with the story of his early career path, stressing that nothing in life comes easy. “My father told me – if you want to succeed, leave and smooth your path yourself… and so did I,” he remembers.

“At first I was studying German in Austria which turned out not quite well – the language was too odd to me. Afterwards, life took me to Marseille, and then to Paris. No matter where I was, I had to start everything from scratch. I have had all the possible jobs. There was a time when I worked as a barman, sold newspapers, took a job at a shoe factory, taught Armenian song classes and staged performances,” reveals Duryan. Step by step, he found his way to success due to believing in his own strength – something he strongly encouraged the new generation to do as well. 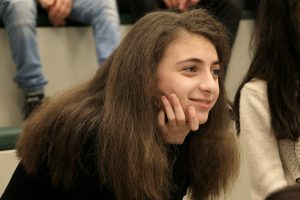 Growing up among intellectuals and artists, Duryan admits that only an actor knows what is behind the smiles, the laughter, and the good mood the actors show on the stage.

“I was performing seven days after my father’s death. “Don Juan Avia” was scheduled, the tickets were sold… On the day of the performance, I woke up to a missed call from Hrant Tokhatyan (a famous Armenian actor). Calling back I found out that his father had died that night too. As a result, instead of him solacing me, I was the one solacing him for his loss,” recalls Duryan. Eventually, they both played the comedy for one sole reason – being an actor is a responsibility to your audience and profession. 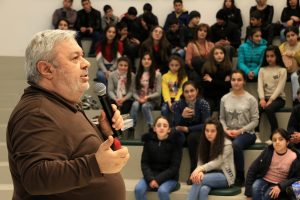 The theater is a kind of therapy – it “heals”. People come to forget their troubles and relax. Actors have to also forget what is going on in their lives. “Sometimes I think to myself – where do we, actors, play more – on the stage or in real life?” contemplates Duryan.

Wrapping up the two-hour meeting, Duryan advised the young generation to think twice before choosing their future professions. “Doing what you love might be the greatest luxury of all,” confesses the actor.

COAF SMART students left the SMARTConnects with a good dose of life advice: read a lot, prioritize education, never be afraid of difficulties, and remember, success comes to those who work hard and believe in their own strength.