How can COAF Healthy Lifestyle Club have impact on a young man’s military service? It has actually happened with Nerses Khachatryan, a bright young man from COAF-supported Lernagog community. A couple of years ago Nerses came back from the army to continue studying international relations at Yerevan European University.

Nerses was one of the kids that has literally grown up with COAF for over a decade.
He was involved in nearly every COAF program offered in his community and set the foundation for all that he accomplished as a young adult.

In his school years, Nerses was a member of COAF healthy lifestyle club in Lernagog. “I insist that the knowledge and skills obtained at the club have greatly helped me in my life,” says Nerses who currently works as a Procurement & Logistics Assistant at COAF. ”I was drafted to the army in 2015 and was demobilized after serving two years in Artsakh. Before being drafted, I had both positive and negative misconceptions about the army. Of course, my views had nothing to do with reality. On my very first day, I was pleasantly surprised at the attitude of the people in charge of our unit. They were very caring and told me I could seek advice and talk about just anything to them. So, serving in the army was not that difficult for me. Actually, it’s about my personality – I adapt to situations around me pretty well.” 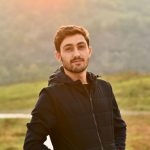 In the army, Nerses was a health instructor or the so-called “combat medic.” Interestingly, soldiers hardly ever get that position without medical background. Nerses had to take an exam during which he presented the best ways to stop bleeding. The doctor thought he was a medical student…

“Thanks to COAF Healthy Lifestyle Club, I easily passed the test and became an instructor,” Nerses says. “Also, my sister studies medicine, and I used to borrow her textbooks on pharmacology and read them in my leisure time. Very soon I became the best instructor and my knowledge came in handy… “

It was the second year of Nerses’s military service when a soldier from his military unit had a heavy gunshot wound. “His leg was injured, and he was severely bleeding. He needed very urgent medical treatment,” Nerses remembers. “I recalled what I had learned at COAF health education class and quickly tourniquetted his leg. Later the guy told me that my actions had saved his life…”

Nerses insists that his experience as a health instructor has been extremely important for him. “I am glad I was able to help my friend and I totally realize that it would be impossible without the information I got at COAF Healthy Lifestyle Club.”