Ashot, 9, is sure that when he grows up, he will be engaged in robotics.

“I am not yet sure what that profession is called. Let me tell you my way. I want to make robots,” explains Ashot.

Robotics is one of his main interests. He enrolls in COAF’s Drawing program in Dalarik village of the Armavir region. During the pandemic, Ashot was also absorbed with sculpting.

One day he went to watch his younger brother Artyom practice mixed martial arts. They say Artyom was very young and was so tired that he fell asleep right on the carpet.

“Ashot asked the trainer to let him continue playing instead of his brother. He really liked it, and the two brothers have been practicing martial arts since then,” tells their mother Zarine. 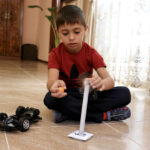 Ashot’s toy cars are usually short-lived. He’s more interested in car engines, which he uses to make new objects. This one, for instance, has been turned into an air-circulator. 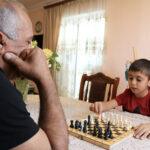 Grandpa and grandson playing chess. Ashot Sr. never fakes losing the game to Ashot Jr., even if it will make his grandson content. 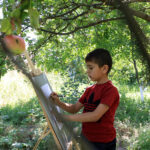 Ashot likes to draw at their nearby yard or in a park. He says he loves to paint nature.

Ashot has participated in many pandemic-themed drawing contests. He has designed this mask in the scope of a contest too. 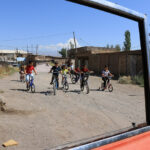 Biking is a thing in Dalarik village. 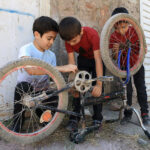 Ashot’s friends are repairing the bike so that he can be back to cycling. 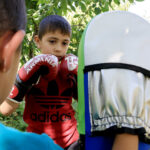 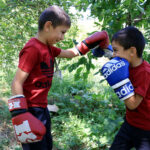 The fight of Harutyunyan brothers. To be in good shape, the siblings exercise themselves at home.