He skillfully cuts the salad vegetables and puts them aside, then goes on to make zucchini cutlets. The roasted cauliflower has long been ready.

He has started playing music and improvising in the kitchen since his early school years.

Since 2005, Davit has been the guitarist at the Vordan Karmir rock band.

“I love playing music and teaching. I do both at the SMART center,” says Davit. 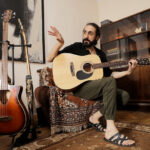 Davit has started playing since 14 years old. He says he has no music education, he is a self-learner. 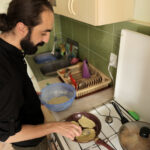 Davit is making zucchini cutlets. Though he loves eating meat, he prefers vegetables in summer. 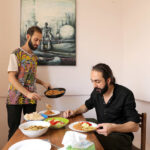 His friends visit him with no hesitation when hungry. They all know Davit will treat them well!

Davit is making a summer salad. He has long been living alone and organizing his everyday life on his own. He is one of the few guys in Vanadzor who live separately from parents. 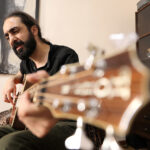 Due to the pandemic, Davit mainly plays at home these days. 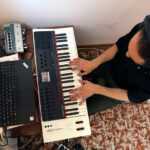 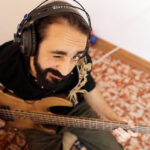 Guitar, bass guitar, keyboard percussion instruments: this is the incomplete list of the musical instruments that David plays. Oud and flute are in his wish list.