From Artsakh to Lori: starting life from zero

Twenty-two years ago, Vanyans left Yerevan for Tsaghkaberd village of the Kashatagh region in Artsakh, without anything, empty-handed. All these years, they settled and created their own farm, but due to the recent war, they now go back to square one.

“On October 17, we had no choice but to leave the village. We packed in 20 minutes and left, taking the television, our kids’ music player, and four blankets. We thought we would soon go back,” tells Arsen Vanyan.

Bavakan, the daughter-in-law, had left the village together with her three minor children earlier. She only took a bag of clothing for kids, thinking their return wouldn’t wait.

Bavakan’s husband Arman had been the last one to be at their home before Tsaghkaberd was occupied. He only managed to take their documents and the family album.

After living with their relatives for a while, the Vanyan family of seven temporarily settled in Shahumyan village of the Lori region.

Twenty-two years later, they have to start their life from zero for the second time. 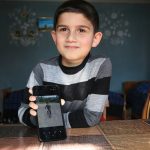 Six-year-old David shows his new bike on the phone. It was left in their village, where he can no longer return.
“If you could visit your village for a short time, what would you take?”
“Our calves, our dogs… and the whole house itself.” 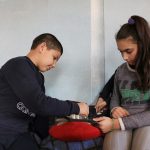 Tigran, 8, and Marina, 10, are playing chess. All their games have been left in Tsaghkaberd. 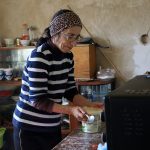 Hamest Vanyan prepares a meal for her large family. Here they have to buy everything, whereas, in Tsaghkaberd, they used to consume their own products. 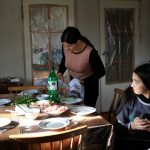 The family prepares to gather at the table. 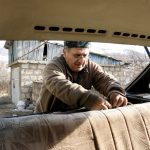 It was with this old car that the Vanyan couple reached Yerevan from Tsaghkaberd. 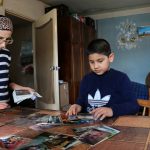 The grandma and her grandson are looking at the saved photos. Most of them were taken in Tsaghkaberd, in their garden, and at home.

Bavakan is line-drying the laundry. She’s gradually adapting to the new environment and the temporary shelter. 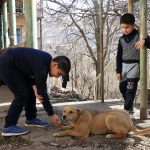 In one breath, Tigran enumerates the names of the dogs and cows left in Tsaghkaberd: Lasy, Jacko, Chalo, Sarou, Sevo, Luna… The brothers have made new friends in Shahumyan as well. Their names, as one might guess, are Jacko and Lasy.