A day in the life of Horom villagers

“Are there people who still bake bread in the tonir?”

“There are but very few. Let’s walk a bit. As soon as we smell a scent of freshly baked lavash, we will go towards it.”

We didn’t find anyone who was baking bread. Instead, we met children circling a wheel through the roads of the village.

“We are collecting wheels for the army,” they shouted and continued rolling the wheel.

The villagers were harvesting potatoes. This year they are not satisfied with the harvest. Still, nobody is complaining. Peace is the only thing they wish for.

Even hundreds of kilometers away from the Armenian-Azerbaijani border,  the thoughts of the people of Horom are on the front line. 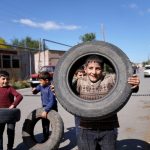 The boys of Horom village are collecting wheels for the army. 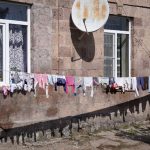 Look at the laundry rope, and you can tell how many kids live in this house. 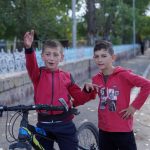 Meet Narek and Andranik from Horom. They are cycling around the village to figure out where to find old and useless wheels. 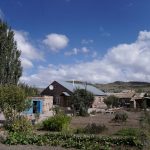 A view from the village. People are almost done with harvesting. The are apples and some potatoes left. 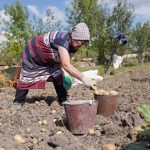 Meet Horomsim from Horom. She is collecting the potato harvest with her husband. They don’t plant it much – so as it feeds the family. 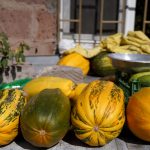 Pumpkins of various colors and types decorate the rooftops and yards of almost all the houses in the village. 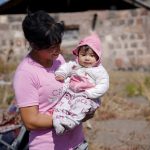 Hermineh with the youngest of her four children. She managed to dig up most of the potato harvest while the baby was sleeping. 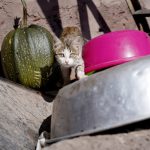 No garden without pumpkins. They are all put in the sun so that they turn yellow and dry out. 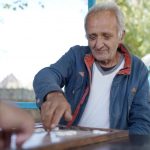 The villagers are watching Grandpa Serjik and Grandpa Mkrtich playing Nardi (Backgammon) with great interest, albeit everyone has long been convinced that Mkrtich is invincible. 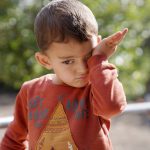 Three-year-old Arman seems to be a serious guy at first glance. He rarely smiles and answers questions upon need. 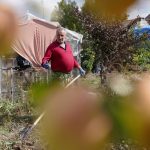 Samvel Vardanyan’s neatly cultivated vegetable garden will make one jealous. He is especially proud of his peach tree, which is hard to grow in the climate of the village. 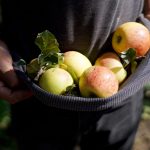 Enter any yard in Horom, and you won’t leave empty-handed.