Learning to play musical instruments by herself, betting on stretching on a pole, working with a weaving hook, doing splits on a homemade rope, playing in the theater. This list goes on and on.

The interests of 17-year-old Iza Evoyan from Arjut have no limits.

“Everyone in our house sings and plays one or more musical instruments, but I always wanted to be an actress and to play in the theater,” says Iza.

She even attended a theater group in Vanadzor for several years, but her dream of becoming an actress in her final year at school gave way to journalism.

“I will still be back to the theater, but a little later. Now I want to learn languages. I really want to study Turkish,” confesses Iza. 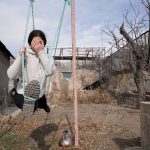 Iza likes to stretch on the pole with her brother Seryozha. And the ropes are her idea – doing splits is nicer this way. 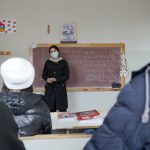 History class. The final exam is a few months away. 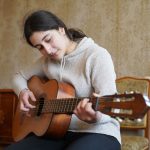 Iza couldn’t wait until she could take the Musical Instruments program at COAF SMART Center and started learning to play the guitar herself. 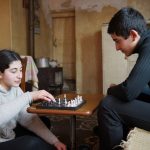 Check and mate! Chess is not Iza’s strongest point. She is still an amateur.

Iza has learned weaving from her grandmother. Due to her school lessons she does not manage to knit much. 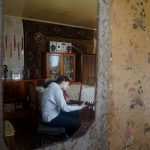 Everyone in Iza’s family plays several musical instruments. Besides the guitar, she plays the pipe a little bit and is keen to learn playing percussion instruments. 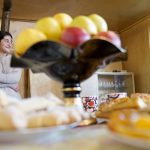 Iza is talking about percussion instruments with her uncle, who used to play the dhol. 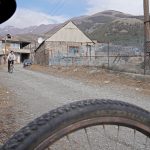 Iza is one of the rare girls who bike as much as boys through the wrecked roads of Arjut.