According to the “40 lies” of grandpa Valod describing the villages of the Lori region (this is how the people of Karinj named them), Karinj villagers eat honey a lot. Grandpa Valod is no longer alive, but his “40 lies” have widely spread across Lori. Indeed, the son of grandpa Valod is the only one who knows all the 40 of them.

Who isn’t aware of the fact that Martiros Saryan visited Dsegh but painted the village of Karinj instead?

People cultivate the soil and grow livestock in the village that lies in stones and green.

In May, the village is almost emptied as those who grow livestock move to the mountains for three months. 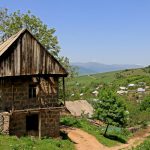 They say, there are nearly 200 houses in the village, some of which have long been abandoned. 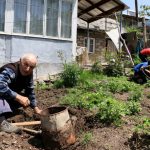 Grandpa Sos repairs the irrigation water pipe with his grandsons. “There is no garden without water,” he says. 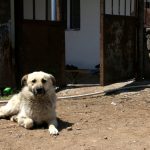 When the kids go outside, Akhtar finds a breezy corner to lay down and stare at the children’s biking. It seems like he is here to support his owner. 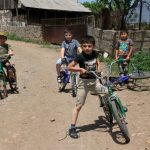 – Hey, let me do a cycle with your bike. I have forgotten mine in the town. – Which one is your town? – Deemats (a neighborhood in Vanadzor). 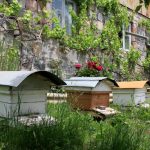 The empty beehives of grandpa Rafo. He says that last year all the bees died. He will buy new ones next year. Villagers like honey as much as they did before. Still, nowadays, not many occupy with beekeeping. 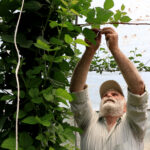 Grandpa Rafo, 65, has done gardening in Greece for 15 years. In 2006, he returned to his home village, established a greenhouse and a garden. 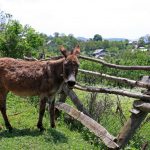 A donkey is an irreplaceable “means of transportation” in Karinj. They are “a labor force” in the mountains during these months of the year. 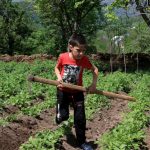 Hamlet is loosening the soil of potato meadows. 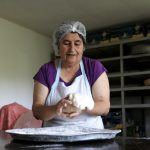 Grandma Amalya is rounding the bread dough. Just like everyone else, she used to make the bread in a wood-fired oven, but she has been switched to an electronic one for several years. 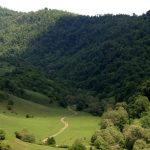 The view from the road to Karinj.