On top of one of the mountains of the Lori region, stands a village called Mets (means big) – Mets Ayrum. During the 1980-90s, it became the new home for newcomers from Gandzak, Baku, Getashen, Kushch, Shahumyan, Erkej, Zhurnabad, and other habitats.

Mets Ayrum reminds The Tower of Babel in the most positive sense of the word. It is a mixture of dialects, cuisines, cultures, and lifestyles.

Nowadays, the village with over 1000 population tries to develop agriculture again. One can catch sight of sunflowers, corn, tobacco plants, as well as peach, grape, and plum fields on the road to the village. 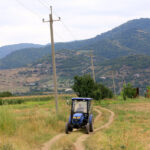 The road to the fields of Mets Ayrum village. 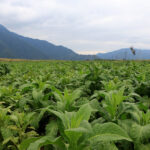 After a long break, the villagers resumed cultivating tobacco. This is yet the only tobacco field in Mets Ayrum. 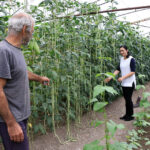 Rafik Khudoyan found a new occupation after retiring. He established a greenhouse next to his house. The assortment of the most exotic vegetable plants in the village grows only in his greenhouse. 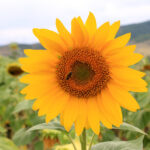 Take a moment to admire the sunflower fields at the edge of the road to Mets Ayrum.

A grandfather with his granddaughter. Mher Mosinyan teaches his 7-year-old granddaughter Diana how to keep the motorcycle wheel straight. Seems like Diana is not doing bad. 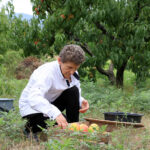 Layla Mosinjan and her family are here to help her friend harvest the peaches.

The farmers assure that they have no problem consuming the harvest. They sell most of it right from their farms.

David, 13, with his dog Jacko and his horse Buyan. Due to the pandemic, instead of participating in summer schools, the children of Mets Ayrum help their parents this year. 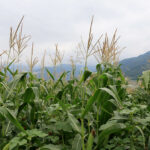 The people of Mets Ayrum grow corn a lot. Some are sold and the rest are used as fodder.

Hrach Mirzoyan, a father of a large family, still mows the grass with an old method. He says a tractor is expensive. 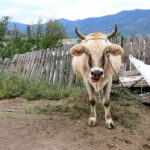 The problem of drinking and irrigation water was solved in Mets Ayrum last year. The villagers preferred gardening to cattle breeding.They say the cost of raising livestock is high whereas the income of it is low.