On the road with COAF since day one

We have been on the road too long of a time. So has our driver and logistician Razmik Vardanyan, a COAF veteran since day one. He is the oldest employee of our dedicated team and knows what’s what at COAF.

Razmik has a big family: 3 children and 7 grandchildren. “We’re contributing to the population growth,” he jokes. Skillful in sewing and tailoring, he worked in textile design decades ago. His ancestral home was right in the heart of Yerevan near the Republic Square. Despite being Yerevantsi, he knows the whole Armenia inside out – there is no region he hasn’t traveled to. “Every flower has its own beauty, similarly, every region, every stone of Armenia, is one of a kind,” says the big patriot. 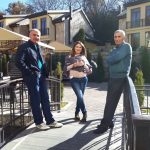 Razmik Vardanyan (on the right) with his COAF colleagues.

Razmik met COAF Founder and Chairman Garo Armen when the latter first visited his homeland Armenia. Their mutual connection asked Razmik to drive Mr. Armen during the week of this stay. This is how they got acquainted, and later, he was offered a job at the newly established COAF. “At first we had 4-5 employees, now we have more than a 100,” remembers Razmik, COAF’s loyal friend, who has come a long way with our beneficiaries, employees, guests, and partners.

The earliest stages of providing help to COAF’s beneficiaries in need remain vivid in his memory. “After the war years, people were in extreme poverty. We were traveling through the villages of the Armavir region and couldn’t endure seeing the conditions our people lived in,” Razmik recalls the many times COAF’s staff members returned from the villages with tears in their eyes.

At first, people were skeptical about those who wanted to help them. They had lost their belief in everything. Gradually, our beneficiaries felt the candid values behind COAF and its people. “We learned to lend a helping hand, they learned to accept help as well,” explains Razmik.

He has so many memories of COAF. Once he and Mr. Armen traveled to the town of Shushi, Artsakh. Razmik clearly remembers how the 4-5 shoe stores of the town were emptied as Mr. Armen bought all the shoes as presents to Shushi’s kids.

The selection process of the COAF SMART territory was a remarkable one too. After driving through five different areas offered for building the center, they finally reached Debet, the village where the SMART center stands now. “Even before my car would stop, Garo got out of the car, looked at the surroundings, and said with his arms wide open – This is it!” 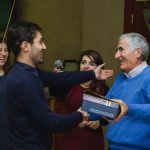 To him, COAF is a family, and every person involved in it is a special, a distinctive one, “Every time we go to the villages, even our beneficiaries treat us as their family members.”

We love Razmik’s morning jokes near the coffee machine. We are thankful to our oldest inhabitant for the work and attitude he has displayed during his tenure with COAF. Thousands of roads we have traveled together, and so many still lie ahead.