More than 100 participants representing local and international organizations, state and local authorities, as well as international experts and private entrepreneurs gathered at the COAF SMART Center in Debet to take part in the Conference on Advancement of Rural Communities  and  to cover 5 main topics related to the rural development: Education, Health, Social Issues, Infrastructure & Economic Development, Migration.

The conference was held on November 9-10. It was initiated by COAF and co-organized with European Union in Armenia and UNDP in Armenia in partnership with British Embassy Yerevan and Armenia Marriott Hotel Yerevan. 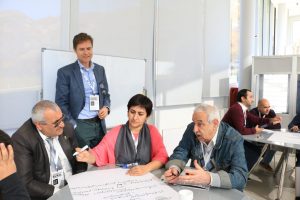 The UNDP team emphasized the importance of the event as a platform for dialogue and exchange of experience, sharing UNDP’s best practices in integrated development of border communities, sustainable rural tourism, forest management, women empowerment, and creating of future skills for rural youth. 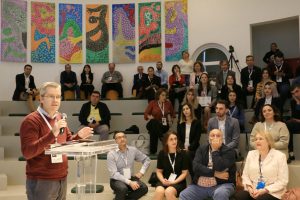 Many of the participants described the event as “a wonderful networking opportunity, as well as a chance to discuss the problems related to rural development.”

At the end of the first day, the participants had a chance to enjoy the virtual exhibition of Martiros Saryan’s and Minas Avetisyan’s paintings, projected on the wall of the COAF SMART Center.

The conference culminated in a Village Development Program Grant award ceremony. COAF had earlier announced a rural development project contest, aiming at supporting the initiatives of COAF beneficiaries. Project proposals were submitted by young beneficiaries and social workers, with the support and collaboration of regional authorities. The first prize went to an open-air cinema project presented by school students from Dsegh. The second prize went to the Oak Hut project presented by the second group of students from Dsegh. The group had proposed to build a “guest-house” on the tree beside the famous Tsover lake for tourists visiting Dsegh. The third prize went to the Dzoragyugh administration for the street lighting project.

Money awards will be allocated to the winners for implementing the projects in their respective communities.

As first-prize winners Lusine Vanyan and Lena Antonyan mentioned, they “had received lots of skills and knowledge from COAF”, and now they would like to “give back to the community by launching a free-of-charge open-air cinema in the village.”

The conference participants were thrilled to meet the young people from rural communities. Some of them, like Artush Khachatryan, the founder of Sareri Bariq (Mountain Goods) social enterprise, offered their pieces of advice on entrepreneurship and rural development. Many of them said the conference was a wonderful opportunity for further partnerships and collaboration between organizations.