The singing lawyer & the rocking teenagers

When the members of Salamanca Band arrived in the COAF SMART Center to take part in SMARTConnects, they immediately got surrounded by excited kids that were eager to try their musical instruments and take selfies with them.

The Salamanca Band and Bugles of The Rifles is named after the Battle of Salamanca on July 22, 1812, during the Peninsula War. The Salamanca Band is based in Exeter, UK. The Band upholds traditions dating back as far as the Napoleonic Wars. The Band has evolved a unique style of music to match the marching pace of The Rifles, the infantry regiment of the British Army.

“We work for the British Military,” says Estelle Adams, the bandmaster. “The army tasks the band in various ways. We play at concerts, parades, military tattoos, festivals and other official events, as well as provide music for formal Regimental dinners.”

This time the Salamanca Band had arrived not just to play a concert for the students and numerous guests of the COAF SMART Center but also to conduct a workshop for the rock band of the center.

The band Up SOS was launched just six months ago. It consists of seven teenagers from nearby rural communities that had not even touched a musical instrument before.

“We hope to learn a lot from them,” says Stella Avetikyan, a member of the Up SOS band. “And we’ll have a chance to show some of our music, too.” 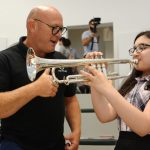 Then the exciting part started. The musicians of the Salamanca band conducted one-on-one sessions with each member of the teenage group. The sessions resulted in a couple of song performances, which they presented right after the workshop, followed by the Salamanca Band concert.

The teenagers of Up SOS band insist they don’t want to become professional musicians. “Actually, we have learnt that almost all the members of the Salamanca Band have other jobs as well,” the kids said, smilingly.

Estelle Adams confirmed that the band members had other professions and got together once a week for rehearsals. “For example, Leila Jones, the band singer, is actually a lawyer, she said.

Leila had been singing for 15 years. “When I am not singing for the Salamanca Band, I work as a trainee solicitor,” she said. “I became interested in becoming a lawyer after learning about copyright through music.”

The band members insisted that music could always be a part of children’s lives even if they did not become professionals.

The concert at the COAF SMART Center was a huge success. It was almost over when the audience demanded for more music. Although the Band had to rush to another concert in Tbilisi, the musicians did an encore for the grateful public.

“The children at the COAF SMART Center were very inspirational and receptive in the workshop phase,” the Band members said. “We really enjoyed working with them.”