Botaas (boot), Gizmon, Rayno, Serik (greyish), Reejeek (redhead), Zerteek (trinket)- these are a few names of COAF SMART Drawing Instructor Taron Marukyan’s cats. He has nine of them, and none of their names is chosen by chance.

The first cat that appeared in Taron’s house was Rayno’s mother, Zerteek.

“I was living alone in Yerevan, so I decided to have a cat. Cats are very independent, and they don’t require much maintenance,” tells Taron.

In 2016, when Taron returned to Vanadzor, he brought Zerteek with him.

“Then Zerteek had kittens. How could I leave them outside? Still, Botaas is the most famous and the most friendly among all,” says Taron, who does not imagine his home and studio without cats.

“If you are an artist, you should live with it. I spend more time thinking of what to paint then on painting itself,” explains Taron continuing to work on the art pieces.

Usually, he works on several things at the same time. He says that he still has a lot to do. He and probably his cat Botaas are the observers of his artwork. Botaas likes to settle down on a chair or a sofa and gaze at Taron’s completed or yet incomplete paintings.

Taron works aiming to have an exhibition in one of the coolest US galleries one day. 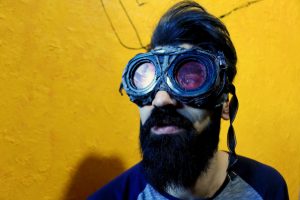 #1. Taron’s portrait with the background of his yet unfinished work. The unique glasses protect him from paints and other substances. 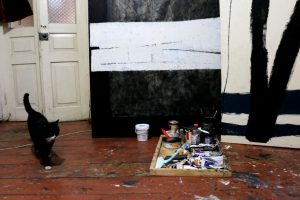 #2. Botaas is the most popular one among nine of Taron’s cats. It is also famous outside Armenia and has always been part of the short films about Taron. 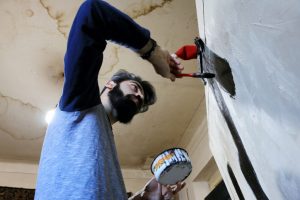 #3. Taron says that Vanadzor creates the atmosphere for drawing. The energy is different there. That is the reason why he couldn’t live in Yerevan for a long time and returned to his hometown. 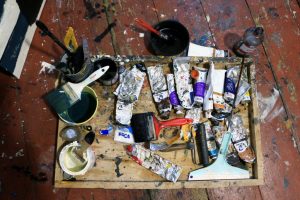 #4. One careless motion in the studio turns your pants into an “artwork”. Getting paint-splattered is inevitable. 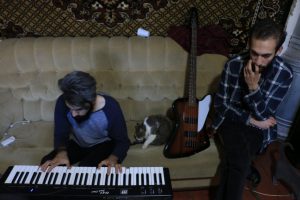 #5. Taron and Vahrad Melikjanyan, a COAF SMART Digital Drawing Instructor, enjoy playing music in their leisure time. Both are self-educated. 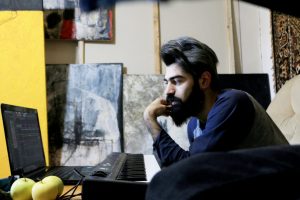 #6. Taron likes to improvise and mix the music they play. 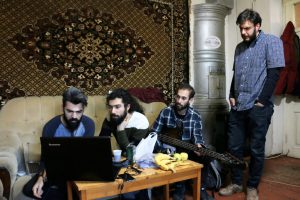 #7. Listening to mixes of “Vordan Karmir” (literally “worm’s red”) and “Clocker” rock bands with Payqar and Khachik, who share professional advice and music industry highlights with Taron and Vahrad. 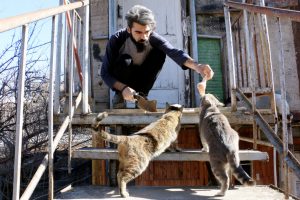 #8. Taron says, as soon as the cats hear the hammer voice they rush to him knowing that it’s time to eat.

*“Valerik” is another way peers call Taron and Vahrad. Not recalling their names is not a huge problem – they both react when hearing “Valerik”.