Valerik 2*. The lord of anthropomorphs

Vahrad Melikjanyan, 26, an artist from the city of Vanadzor, seems to be a character from his own paintings and robot sculptures.

He does not even deny it. Vahrad is convinced that each artist subconsciously puts something of himself into his own created characters.

“Whoever sees the first anthropomorphic robot says that the legs are exactly the replicas of my legs,” says Vahrad with a smile, shifting his gaze from his legs smoothly to the sculpture.

All his characters live in him, he just brings them from another reality to our own reality. That is why Vahrad thinks it is pointless to give them names.

“How can we name something that does not exist in our visible reality? They live only in the reality I see,” he says.

Vahrad is interested in every type of art, but in recent months he is absorbed with anthropomorphic robots and works day and night to create them.

Vahrad’s collection of anthropomorphs will consist of 30 robots that he plans to display in an abandoned factory building. 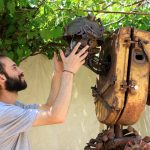 Meet Ashot, the three-meter anthropomorphic robot. Vahrad has started to make it since the first day of self-isolation but hasn’t finished yet. Still needs some work. 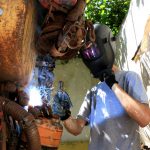 The raw materials he uses are mainly scrap metal, which he gets from scrap warehouses or landfills. He welds the parts together. 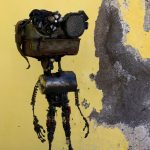 Meet the first minibot – Valerik. Vahrad says many think they both look alike. In any case, all coincidences are random:) 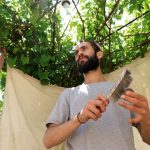 He carefully brushes the rust of each piece before welding. 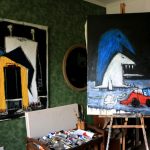 Vahrad has turned his bedroom into an art studio. Every single piece in the room, from the study made of a suitcase to the lamp crafted from a respirator, is an artwork. 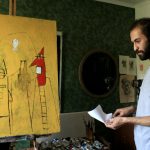 The character wearing a mask on the canvas was created months before the outbreak of coronavirus. Who knew one day the two realities would collide? 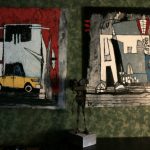 Vahrad rarely names his works. He sometimes goes for satirical names. Just like that, the left one is called “the driver of Yandex” (a taxi service provider in Armenia). 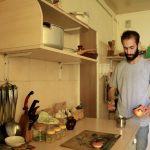 Vahrad never asks what kind of coffee one wants. He always makes it to his taste! 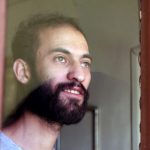 Vahrad’s portrait: the way he looks at the robot named Ashot through his kitchen window.

*Vahrad’s friends’ crew also calls him Valerik. Not remembering his name is not a huge problem; call Valerik and he will for sure react.