A few months ago, Yura Tatoyan, 16, met a foreigner in his local Akori community. The young tourist had apparently lost his way. He kept asking, “Do you speak English?” but nobody seemed to understand him. Yura approached him and found out that he wanted to get to Alaverdi, a town near Akori. “ I realized that I could easily talk to foreigners,” Yura tells proudly.

Yura has studied English with Access Microscholarship Program, jointly conducted by COAF and US Embassy in Armenia. 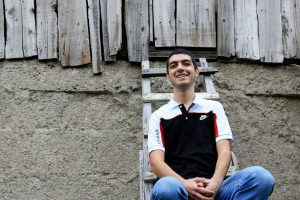 “When Access was launched in Akori, I was just 12. Actually, I was a bit too young to take part in the program. The teacher said I could just sit there and listen. However, soon we took a test, I scored very high and became a real Access participant,” Yura says, laughingly. “Now I can easily communicate, read English texts and watch videos. And I was very proud I managed to help the tourist that was lost in our village.”

You can read and translate letters written in English

“Yura studies Service Management at Alaverdi State College. However, he always insists that folk music is what he likes most. He even sings in a folk band in Alaverdi and sometimes performs in Yerevan,” Yura’s mother Anna Tatoyan says. “During one of our Yerevan visits we took a taxi, and the driver showed me a letter in English. He asked me to translate it, and I proudly said that my son would help him. Yura read the letter, understood everything and explained it to the driver. A couple of years ago we couldn’t even imagine he would manage to learn English in Akori… Most importantly, he often applies his knowledge in real life.”

You find a job and work remotely

“Yura is a very caring son,” Anna says.- “When he was a little boy, and we had to take a bus in cold weather, he used to cover my ears with his small hands to protect me from cold. And when he grew up, he started thinking of ways to earn some money to buy me presents.”

Yura not only plays the piano and sings but also loves making music arrangements on his computer. “Armenian musicians from Diaspora frequently use Armenian rhythms in their works. When I graduated from COAF and US Embassy Access program, I started producing Armenian folk music arrangements and offering them to foreign clients,” Yura tells. “Negotiating in English is an important part of my work. Potential clients tend to trust me more when they realize I know English. If I hadn’t learned English with COAF, I would have hardly managed to find a job and earn some money.”